Is meditation a gazing at one’s own navel?

If you're sitting still on a pillow with eyes half closed for 45 minutes, you're obviously doing something similar to navel-gazing. It even resembles so well that you have to admit: yes.

However, it doesn’t end there. ‘Navel gazing’ is usually meant pejoratively. This interpretation is of someone (and guaranteed also by someone) who is focused on himself in a very ego-wise manner. Someone who would better do something more meaningful than anything Zen-like. To an outsider it looks like a waste of time. It’s up to you to make sure that it isn’t so, of course. One can gaze at the navel in many different ways...

Social action is an ‘egoistic altruism’?

If you talk about your social action at any possible occasion (to others and to yourself), then of course it looks like that. Look how well I'm doing, how good I am. The question is then even whether that ‘social action’ ultimately is positive for its beneficiary (or victim?). I know this is very strong language, but I also know that it happens many times: a caregiver who without consciously willing to, ensures that the cared-for remains destitute more than necessary, e.g. to make himself feel needed/necessary as caregiver.

Meditation and social action go together in a very positive sense.

In Buddhism, the way towards 'awakening' (enlightenment) is many times shown as a series of 10 images: the boy and the ox. On the tenth image, you see the boy, who has now become an adult, wise person, return to the 'market', this is: all hustle and bustle of the world. His compassion drives him to (try to) help where he can and how he can. Perhaps the market people look at him firstly as a fool. So be it. 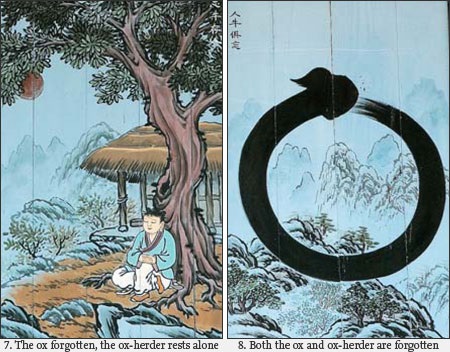 In the ten images we go, because it is so beautiful, a bit in reverse. In the seventh, you see the boy in deep meditation. This flows into the eighth image where the boy has 'gone' and in his place there is a circle: the ‘empty-less emptiness’. Pure Samadhi. On the ninth image you see the environment, the beauty of nature, such as the boy looks at it. A 'Kensho' experience: everything is as it was before and yet everything is completely different, because of being looked at in a different way. The boy sees himself in the environment and at the same time he is completely transparent. 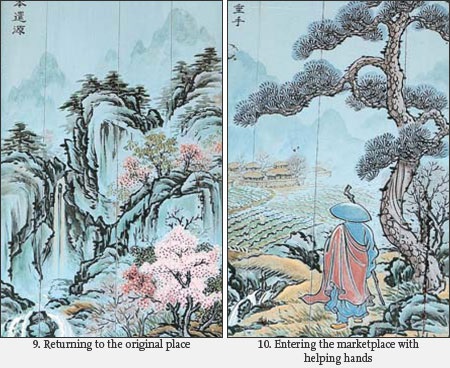 He has everything he needs.

"Should anyone first reach Nirvana to only then start doing things?" is not an altogether justified question. The answer is of course: no. An even better answer is: yes, but then you have to really, really understand what this is about. The ten images are not so much about an ideal course of life, but more about an event that basically takes place at one point in time, in a constant repetition. Moreover, it’s about you. Your meditation. Your social action. In other words, the last image is already present in all the images before and all images of before are present in the last image. It's one whole (synthesis), so not to be seen as two separate entities that fit into a larger whole, as e.g. in Buddhism itself. They can, of course, exist as two separate entities, but that is not what this is about right now.

The meditation that this is about, is a meditation that ‘as by itself’ overflows into action, as a bucket that overflows. However, it is not done for this purpose. This does not 'need' to be and even, given what meditation is, would not even be possible. The action is not at all a ‘proof’ or ‘litmus test’ for the quality of meditation. It is always OK - nothing is needed. The 'awakened' by no means goes to the market to prove that his meditation was meaningful. Nor to others, nor to himself. It doesn’t bother him in any way. He just ‘does himself’ and expresses himself this way... or not, equally well. In the case of the images he does. Moreover, he carries his meditation with him.

In this last sentence there is something more that is interesting. Twofold. One doesn’t need a permanent 'formal meditation’ to always carry it with oneself. The intrinsic purpose (i.e. outside the meditation itself) of ‘formal meditation’ is not only what happens on the cushion (or chair). Indeed, with a rather good meditation one has the spontaneous feeling of carrying something from it during the day, every day. Not that one is looking for one’s own navel the whole day long. What then? Well, being a little more open to Kensho now and then. Also possible: being a little bit closer to a sense of ‘compassion’. Also possible: seeing more clearly that the subconscious plays a major role in everything - really everything. The latter may show itself in a feeling of ego-humility. I don't do this, I don't help anyone, and yet there is help.

Not I do this social action. Who then can watch at how I do it?

The ‘meditation that one carries with oneself’ is also interesting for, let us say, the caregiver. A term that, in my opinion, refers completely to the same as this meditation, is 'empathy'. At least in the sense that it completely carries for me: not so much a kind of empathy that can name feelings (such as e.g. described in medical textbooks of last century) but 'empathy beyond’, more fully ‘empathy beyond the conceptual’. This is: not being held back by concepts. Fully. Right through them. As if they are not even there. And yet they are. And yet they are not. I hope to give something of this in the Aurelis coaches’ course. You look at the coachee who asks you to put the next question. You show yourself as a perfect mirror. You understand the silence of the clapping of one hand.

You simply do. Nothing special. That is the most special of the entire universe. So incredibly special that no one notices.