Meditation is 'in'. But... what is meditation really? There are many external forms in which it is conducted. There are also many underlying differences in the deeper ground of it. Lots of people say lots of different things about it. It is certainly interesting to look at East and West people/currents that are or were intensely involved with it for a long time. In this way, I myself see recurring issues and an image of meditation that 'fits' with neurophysiology, cognitive science... and also with Aurelis. To depict this clearly, is not easy.

An attempt (and simultaneously an excuse, because as they say, you should ultimately do it yourself to really grasp it).

Meditation is being in a state of non-duality in thinking and being. There is no 'duality'... and so also no unity in the sense of 'it is this and not that’... for that is of course also a duality. You immediately see how difficult it is to talk about meditation. However, libraries have been written about it. This marks the first paradox. 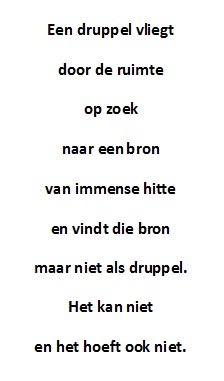 In meditation, there is no duality between reason and feeling, between inside and outside, between here and there, between 'me' and 'you'. It is the real, serious transcendence of egoism. This is not to say that the ego is broken down. It 'transcends itself’. It is like the top of the flower bud that in releasing itself allows the flower to 'naturally' open. The top of the flower bud is thus not broken. The top of the flower bud (the ego) does not disappear, but transforms into something much larger: the ‘total self’. Transcendence-of-egoism in this sense is therefore, not in the first place laying one's own ego beneath that of others, not even on an equal footing relative to that of others. It is, however, something that takes place primarily between ego and ‘deeper self' or' total self’. There is not just relaxation, but very deep relaxation. There is not just wellness but very deep wellness.

Perhaps one can effectively speak of a ‘beyond relaxation’. By going deeper into it, one enters something 'different', like a whirlpool in a river (not to be misunderstand as a superficial kind of esotericism, please).

The sign of the folding together of the hands is an oriental 'mudra’ (symbolic posture or movement) that was adopted in the West as a prayer attitude. This essentially also indicates the 'bringing together of two to one’. Its expression is very diverse, but the essence is recurring everywhere.

An exclusive orientation upon duality leads to ‘medicine of war’. The disease is a priori the enemy, also when it is about psychosomatics. AURELIS, in contrast to this, stands for a ‘medicine or peace’. Note: the willingness to war is herein a realistic element... but no more than one element. The letting-happen in a particular domain (psychosomatics) is of much greater importance. Someone who suffers from a psychosomatic situation, actually faces a difficult opening of the total flour (as a symbol for the total self). The flower bud (as a symbol of pure ego) does not let go, for fear to disappear. There is more and more tension and then cracks appear -> psychosomatic symptoms. You can decrease this tension (= symptoms) in 2 ways:

In concrete terms, meditation is not the ‘absence of normal thought’. Thoughts may be present as well as ever. In meditation, something else adds to this, namely attention to the beyond-the-thoughts, to the 'silence' of the background.

You reach this silence not by turning off the normal noise, this is: through pushing away normal thoughts. Even if you could do so, you would not reach this 'silence'. Rather, the thoughts that you push away, get to call even louder. But if you pay attention to the underlying silence, only for itself, then you see that the ‘disturbing thoughts’ sooner or later get less and less disruptive. Actually, it doesn’t matter. You can perfectly meditate and not meditate at the same time.